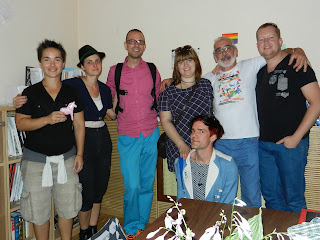 Stockholm -- The first Nordic Fire on Eastern European Rainbow Barricades took place in the Swedish capital November 25-27, 2011 with invited guests from Ukraine and Hungary as well as presentations on LGBT situations in Belgrade, Minsk, Riga, Helsinki and Bucharest.

Folk and classic music, song, and dance was provided at several of the festival venues by Tamás Lovas, Károly Varga and Sándor Fehér of the Continuo Trio of Budapest, the ILGCN cltural ambassadors of Hungary.

At the Nordic Fire session at the CRD offices in the Stockholm Gamla Stan island, Swedish Liberal Party parliamentarian Barbro Westerholm received the annual Tupilak "Bifrost" awards honoring heterosexual bridge-builders uniting the LGBT and the heterosexual communities both in Sweden and abroad.

"Thanks for this fine award. This appreciation for our work with this fanatic and moving motivation really means a lot to us," says Michal Piotrowski, project leader at the Polish Institute.

Also at the CRD, Bill Schiller described the long history of Tupilak &amp; ILGCN involvement with Eastern European colleagues and the emphasis on mutual exchange. "We were very impressed with the mutual interaction of LGBT groups in the Ukraine and Belarus with our Swedish groups," says Schiller over the recent 3-nation meetings in Kiev and Minsk made possible with support from the Swedish Institute -- the official body promoting international co-operation.

"We are very happy to have had the financial support of ROHS (Swedish national LGBT solidarity organization) to make this min-festival "between" Stockholm Prides possible," says Bill Schiller, international secretary of Tupilak (Nordic rainbows cultural workers) and secretary general of the ILGCN's Information Secretariat in Stockholm.

Alexander L. described the turbulent situation and extensive homophobia Serbian. (Belgrade is to be the site of one of the stages of next year's ILGCN world conference, along with Rio de Janeiro and the Crimean town of Seimiz.) while Finnish photographer Jussi Jässkeläinen described his work with Bucharest and Helsinki Prides.


"We are pleased to have another Tupilak event at our premises," states Ola Ståhle of the Posithivagruppen (HIV positive men having sex with men) office, and we are happy to have colleagues from the Baltic states at our summer camps and hope to join in future Tupilak and ILGCN exchanges in Eastern Europe."

Films by Swedish Tupilak member Willi Reichhold described the recent Swedish-Ukrainian-Belarus solidarity visit to Kiev, the summer inauguration ceremony in Visby of the first Nordic LGBT monument on the shoreline of the Swedish Baltic island of Gotland and the "global survival" journey of plants and human beings in harsh conditions around the world.

Swedish, Danish, Norwegian, Finnish and Icelandic and Eastern European works from the Tupilak &amp;  ILGCN Travelling Art & Photography Exhibition were displayed at all the festival venues, including new photo series from Belarus and the Ukraine, and LGBT CD music from Poland and the Nordic nations were played at festival venues as well.

Other foreign visitors taking part in discussions at the CRD office, the Bio Rio, Posithivagruppen and the LGBT cultural center Hallongrottan came from Norway, Finland, Kenya and Somalia.

"We hope the next Nordic Fire festival in Stockholm at the end of next March will focus on Swedish and Nordic LGBT co-operation with Estonia, Russia and Belarus," concludes Bill Schiller. "Once again we'll ask our Tupilak colleagues and the national LGBT organizations in the Nordic region to join us. We hope the Nordic Fire festival can be duplicated elsewhere in the Nordic region -- and we'll discuss this at coming Nordic-Baltic-Polish-Russian-Belarus Rainbow Network meetings coming up in Stockholm and other Nordic capitals during 2012."